I was delighted to find out that my annual June trip up to Boiestown, NB to do the Central NB Woodmen's Museum fundraiser auction piggybacked nicely with my old friend Ken Simard's yearly trip to the Rangeley Region with his son and his friends to fish the region's many rivers.  A short 7 hour drive from Bennington to Oquossoc, Maine on June 3rd and we were hooked up again after a few years' hiatus...and just in time for lunch!

After a few refreshing beverages, we headed for Upper Dam, which, for 160 years, has held back the waters of Mooselookmeguntic Lake and generated hydro power.  Not to mention creating an amazing fishery below it, exploited by the likes of streamer innovator Carrie Stevens and others.  The place is ripe with fly fishing history, and I have enjoyed great fishing there.  My largest landlocked salmon to date came on a soft hackle there.

Ken and "the boys" (lol, they range in age from 45 to 50 or so, but they'll always be "the boys" to me) ready to hit the pool below the dam:  CLICK ON PICS TO ENLARGE THEM 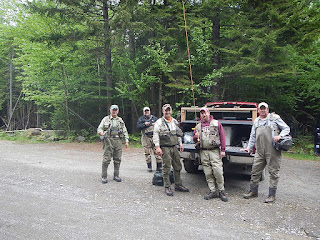 (l to r: Ken, Scott (owns a car dealership in Buffalo, NY), David (Ken's son, works for the Federal Aeronautics Administration), Billy (Portland, ME fireman), and Greg (Buffalo, NY proud hockey dad - his son was a key player on Yale's national championship team a couple years ago; he now advises families about college hockey for their children).   A diverse group for sure!  And a group that I believe collectively keeps the LaBatts Brewing Company in business.

I knew there were changes taking place at Upper Dam; the power company that owns the dam has been reconstructing it for a year or so.  But I wasn't quite ready for this: 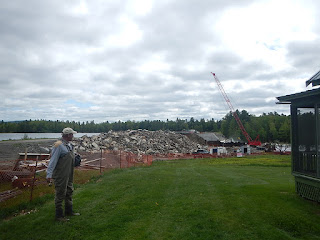 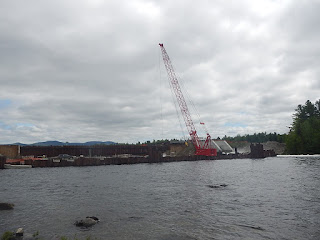 Until a year or so ago, the dam looked like this (photo unabashedly borrowed from my friend Bob Hilyard's (and son Leslie's) book, Carrie Stevens - Maker of Rangeley Favorite Trout and Salmon Flies, published in 2000 by Stackpole Books.  If you don't have a copy, you should): 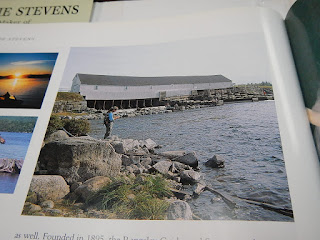 The spot where I landed my largest-ever landlocked is now unfishable due to the single release chute.  Other spots nearer the dam that were excellent are now just slack water.  But the boys did hook a batch of brook trout and landlocks farther down from the dam than we used to fish.  It's all about current, of course.

I love the look of the camps along the shore near the dam.  I hope to build a similar one on the banks of the Miramichi someday. 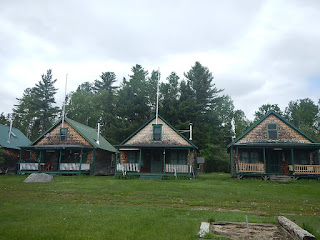 I fished a little, to no great effect, with a Gray Ghost.  Ya, I know, it has flash in it.  Pagan. 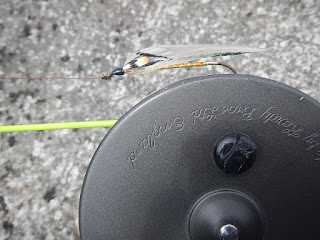 It's a pretty hefty up-hill hike back to the parking area when you're done fishing at Upper Dam.  Every time we fish it we joke about what a killing a kid with a golf cart and a cooler full of beer could make ferrying the likes of us back up to the trucks!

Thursday the boys headed off to fish the Magalloway River; Kenny and I opted to spend the day trolling (i.e., reminiscing and enjoying a few cold ones) Rangeley Lake.  We trolled in style in his latest boat! 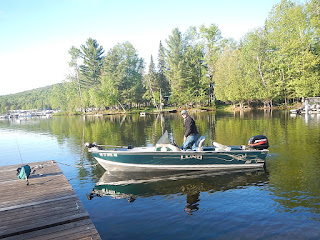 Early morning on just about any lake can be beautiful...throw in a loon or two and it qualifies as an "experience." 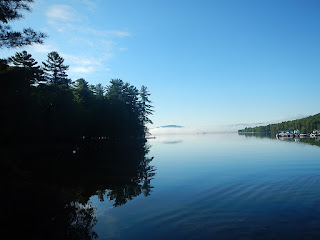 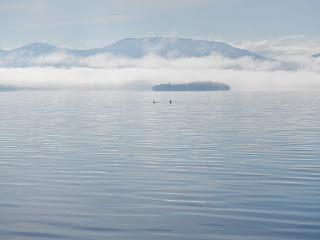 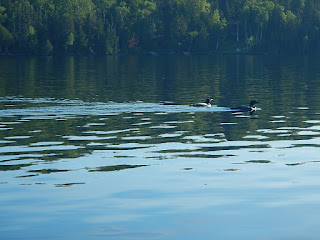 We had a pretty full complement of streamers ready for action: 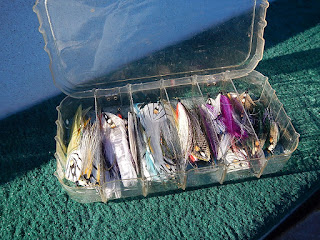 Sadly, I must report that the only thing our streamers attracted that morning was a very affable member of the Maine Warden Service who was on the water checking licenses and boating requirements.  We had a very nice conversation with him, and he seemed only mildly taken aback by the number of beers in our cooler.  Happily, it was only about 8am.  No harm, no foul.

Since there was nothing going on fishing-wise, we decided to head in at lunchtime, grab a bite (which turned out to be the world's most expensive bowl of clam chowder), and take in the sights.  I was tickled to be able to spend time at the Outdoor Sporting Heritage Museum in Oquossoc: 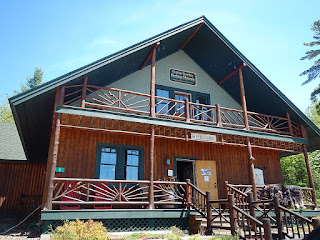 Volunteers (and friends) like Don Palmer and Bob Hilyard worked incredibly long and hard to bring this museum to fruition.  They, and all who took part in the process, should be very, very proud of the results of their efforts.  A few pics from inside: 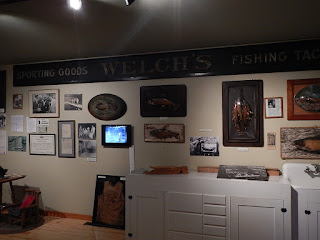 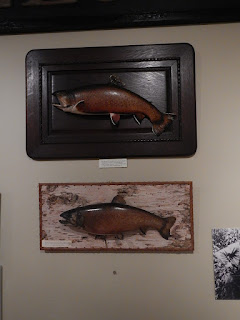 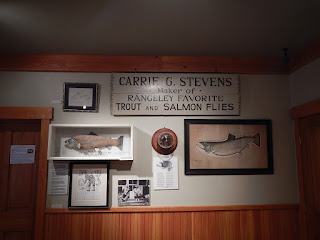 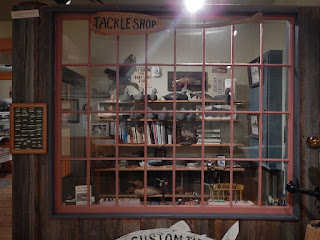 The Museum is a treasure for those, like me, that revel in our sporting heritage.  Go there if you can.

Thursday came and went too fast; my time with Ken and the boys was over for another year.  My liver breathed a sigh of relief.

Friday early darkthirty and I headed to home base in New Brunswick, Boiestown, about a six hour drive.   Beautiful day, beautiful river upon my arrival in the early afternoon. 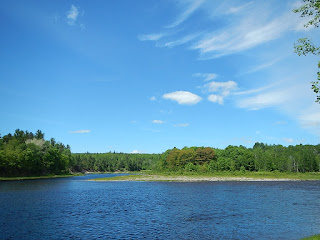 I just kicked back for the rest of the day, enjoying dinner and drinks with my pal Vin Swayze, his wife Hazel and their daughter Michele, and settled into camp for a few days stay.  Love the "Log Camp" as it is called: 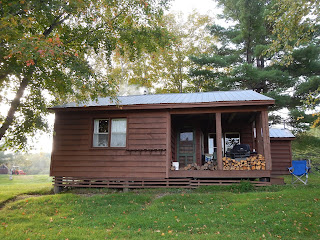 Saturday morning was gorgeous.  I wish everyone could start their day looking at this scene; the world would be a more peaceful place. 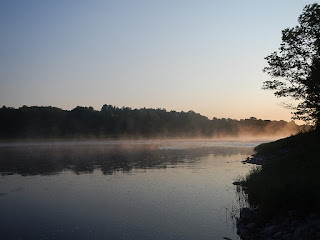 I couldn't resist making a quick little video of these guys heading up river (turn up your speakers):


The day passed quickly.  Vin hosted a "pre-party party" on his deck before the Woodmen's Museum fundraiser where it was great to renew acquaintances, then head over to the Museum.  If you ever get to Central New Brunswick, the Museum is a "must stop".  The province is steeped in logging history, and the Museum gives you a great look into that past. 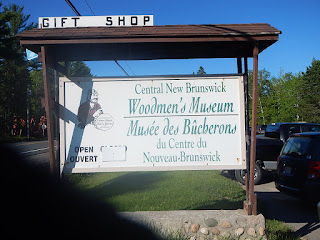 The auction raised almost $13,000 for the Museum's operations.  I'm always happy to help that good cause.  And now for some fishing!  River looks good, reports of some fish in the system (a 44 incher landed upriver a few days prior).  I'm so ready.  Oh, wait, that's right.  Something about a new roof on Vin's other camp.  I vaguely remember some conversation about that back in May, likely when I was well in my cups.  Sigh.

The roof (it leaks and doesn't look nice anymore): 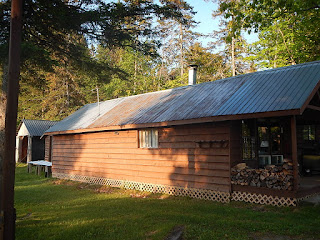 I did a little addition to Dan Bullock's home last year, and devised this system for getting around on a steep steel roof.  All ya need is a front-end loader and a ladder! 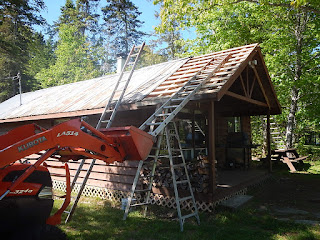 Rain delay, but almost there: 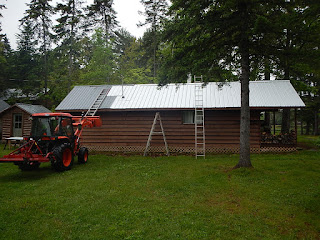 Job done!  You haven't lived until you've worked with Allan Wilson and Vin Swayze at the same time!  LOL, I tried to stay up on the peak, out of harm's way!  Seriously, we worked hard but had a lot of fun at the same time.  They are great guys. 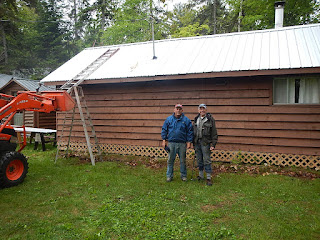 We fished an hour or so each day, too.  No salmon to be seen (much less felt), but a bunch of smaller brook trout.  Some day I will hit the sea-runs!

The big Loomis was a bit much for 8 inch brookies, but they sure liked the Celtic Beauty! 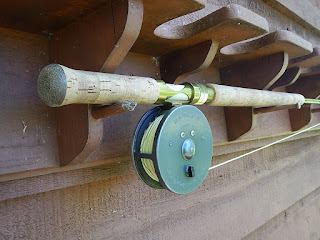 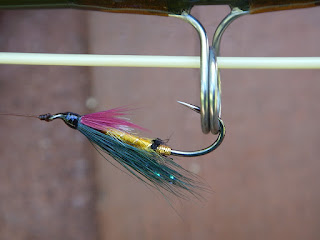 Headed home exactly 7 days after I headed to Maine.  A fine trip, full of friends and memories.  What more can you ask of life, eh?