Brodie was 10 months old on October 23rd which, to my conservative mind (where bird dogs are concerned, LOL) is the perfect age to start the process of becoming a bird dog.  I know many folks begin actual field training earlier; I'm not a professional trainer, so I'm less likely to make a mistake that haunts a dog if I wait until they are this age.  His time in New Brunswick in late September and early October with us enabled me to get him used to his e-collar and bell and to learn to love digging into covers to see what he might find.  Time to try to get him into birds and see if the great genes he has would express themselves the way I hoped they would!

My friend Rich Norman has a great woodcock cover behind his home and he lives on a dirt road with little traffic - perfect for a young, learning setter.  Not a big cover; it provides a solid one hour hunt...which these days is pretty much my limit.  We hit the ground around 1pm on Tuesday, October 25th.  Recent cold, wind and rain brought most of the leaves down; conditions were ideal.

We moved 13 woodcock that day, likely all flight birds.  In the early going, Brodie blew right through a pair of birds, but then came back to see what the fuss was all about - he'd never heard me yell "BIRD!" before.  He sniffed around a little and moved on.  Towards the end of the hunt, I almost stepped on a bird..and then another...and then a pair.  All that BIRD! yelling brought Brodie in.  And then he locked up into the most beautiful point I've ever seen.  OK, OK, I say that about just about every point any of my dogs, over the years, have made.  Better still, he held his point until my few steps towards him flushed the bird, and away he went.  Which is fine with me; I've never been a fan of "steady to wing and shot."  I like to give my dogs every advantage when it comes to finding grouse and woodcock; holding them back until they are released seems like cruel and unusual punishment!

I did not get a photo of that point, but it's etched in my brain!  Brodie works a great range, and is really good about checking in with me:


I have to say that his first hunt was a total success...Brodie became a bird dog that day!

But he's still a pup, and puppies gotta play.  Brodie is a master thief; I've picked up enough of Bridget''s panties in the backyard to prove that!  We call him a "self-amuser"; he'll play for hours in the backyard with real puppy toys, or twigs, or rocks, or a garden hose:


Back hunting at Rich's today, with our mutual friend Mark Mahoney along for the fun.  Those flight birds seemed to have moved on, but as we were heading out of the cover, I flushed a bird.  At the sound of my "BIRD!", Brodie came running in and pointed the exact spot where the bird had been seconds before.  A minute or so later, another bird got up.  I didn't think Brodie was in the vicinity, but Rich had a better vantage point and said that he was definitely working the bird when it flushed. 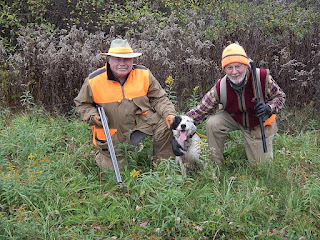