Since it's twelve degrees out today (March 5, 2017) here in southern Vermont, I thought it would be a good day to make my Miller High Life Chili, and share the recipe.  It's a simple chili, really, and you can make it as spicey as you like.  Personally, I like it relatively mild, so I can taste all the ingredients, rather than just the spice.  You need to round up these ingredients (I strongly recommend a complete 6-pack of the Miller High Life...one bottle for the chili, four bottles to stay hydrated with during the cooking process, and one to enjoy with the chili): 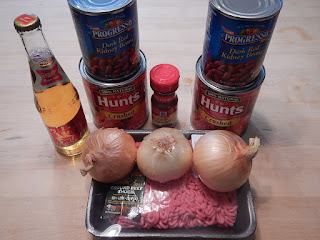 Back when I worked at the National Wild Turkey Federation's South Carolina headquarters, the boss decided that all the male employees had to make a chili for a competition to be judged by all the female employees.  He liked to do crap like that.  Anyway, this chili won hands down.  I thought it was because it was so wonderful.  Turns out, every male in the building except yours truly was a big deer hunter and virtually force fed their families exclusively on venison.  The ladies all told me the reason they liked mine so much was because it was the only one made with beef!  Ego deflating information.  But I digress (don't I always?).

This was the first time I used crushed tomatoes; I won't do that again.  I much prefer whole peeled canned tomatoes.  I cut them up as the cook in the chili.  Years ago, when I had a big garden, I would blanch, peel and freeze my tomatoes to make this chili with...so much better than store bought!

First step is to cut up those white onions into fairly course pieces. 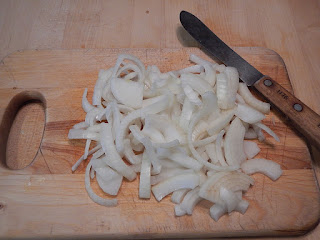 Anyway, cover the bottom of the oven with a thin layer of olive oil, and start to glaze them: 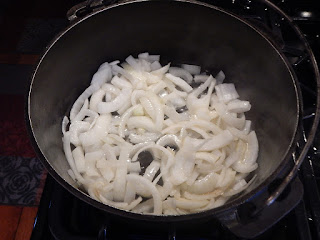 As they are glazing, I start adding the spices (salt, pepper and camp mix only; save the chili powder until all the ingredients are in).  The old "salt and pepper to taste" axiom comes into play here. 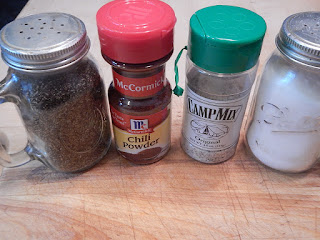 The salt, pepper and chili powder are pretty straightforward, every day spices.  The camp mix bears some explanation:  a few years back, my pal Vin Swazey up in New Brunswick introduced me to it; he found it in one of the big liquor store complexes along I-95 in New Hampshire, near its border with Maine.  It is amazing stuff from a small, family company in Hollis, New Hampshire.  You can buy it, and there other very good spice concoctions here: http://www.campmix.com/ .  We regularly use their spud fixin', lemon pepper, and honey-cinnamon camp mixes.  This has been an uncompensated advertisement.  Back to the chili.

I typically use about a third of one of those little jars of chili powder in this recipe, adding a little at a time until I get the "heat" level I like.  Continuing with my didactic style, I really think you should only use a wooden spoon to stir/mix ingredients in your chili.  Don't know why.  Stainless Steel just seems wrong here.  I think it bruises the ingredients.  And don't even think about plastic. 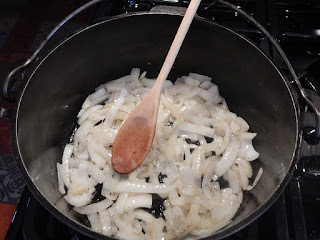 Just glaze the onions...you don't want them to get soft or burned...they're going to be cooking for about an hour total, so they have plenty of time to soften up.  Time to add that pound of ground chuck.  Make sure it's the 80:20 stuff.  We need the fat for taste! 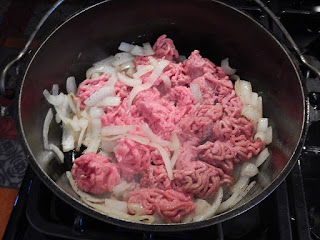 Use that wooden spoon to stir the beef and onions so that the beef browns evenly: 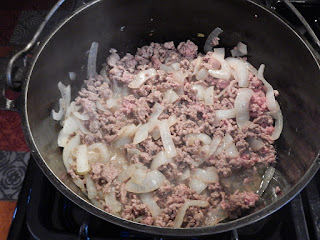 Time for all the other ingredients.  Drain the two cans of dark red kidney beans, toss 'em in with the beef and onions.  Don't drain the cans of tomatoes...dump the whole cans in.  And of course, the main ingredient: one bottle of Miller High Life beer. 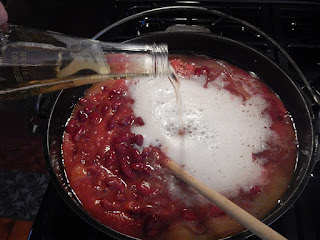 Simmer and occasionally stir for one hour and it's done! 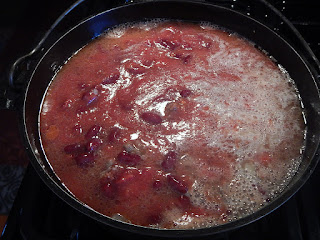 Now you have to eat this stuff, and there only one way to serve it:  topped with Made in Vermont Cabot's Seriously Sharp cheddar cheese: 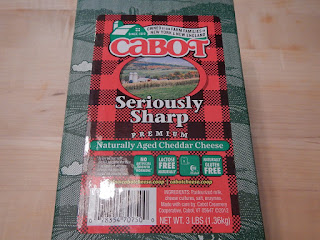 And of course, it has to be enjoyed with that one bottle of High Life left from the six pack because you stayed well-hydrated during the cooking process! 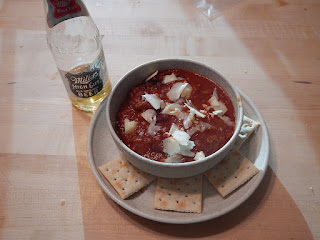 I like to put it up in single serving containers (I'm the only chili eater in the house) for future cold weather lunches. 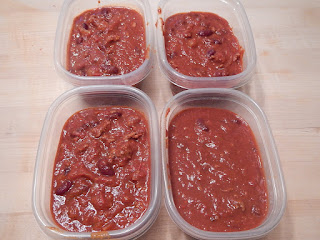 And there you have it...Miller High Life Chili.  Also great to put in a wide-mouth thermos for cold weather fishing or hunting or hiking lunches!