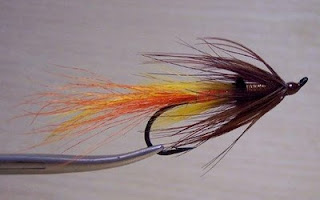 The Golden Pheasant Spey fly was developed by my good friend and salmon fishing campmate, Bob Warren.  Bob edited the beautiful Fishing Atlantic Salmon - the Flies and the Patterns by Joseph D. Bates, Jr. and Pamela Bates Richards.  His flies can be seen in that book, as well as in Bob Veverka's Spey Flies and How to Tie Them, Dick Stewart and Farrow Allen's Flies for Atlantic Salmon and others.

It's primarily an autumn fly, created for the Miramichi, where Bob has been fishing for more than 30 years.  In 2011, in very low water, we fished it down to size 10.  In more "normal" (whatever that means!) water levels, sizes 4 and 6 work well.  Its always good to have an assortment of sizes! 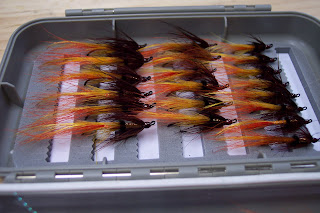 ﻿One of the things I enjoy most about the Golden Pheasant Spey, aside from the way salmon take it, is the beauty of the materials used to create the fly.  Other than the thread, tinsel and floss, its a "natural" fly; I couldn't make myself add synthetic flash to the tail - and I often do just that to other classic flies.  But not this fly.  Just laying out the materials for the fly is a joy! 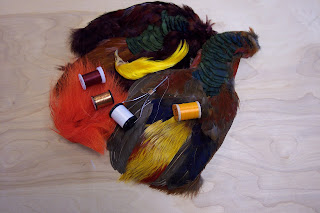 The recipe:
Hook:  The G.P. Spey lends itself beautifully to hooks like Bob Veverka's Daiichi 2139
Tag:      Oval copper tinsel, sized to suit hook size
Tail:      Golden Pheasant crest over orange Polar Bear.  I like the length just a bit longer than the fly's body.
Body:   Rear half hot orange floss or silk, ribbed with oval copper tinsel﻿ and veiled with yellow Golden  Pheasant rump feathers; black ostrich herl dividing the two body halves; front half oval copper tinsel wrapped in touching turns.
Hackle: Claret hackle (I like Whiting American hen; others may prefer cock.)  Bob's original recipe calls for two Golden Pheasant breast feathers over the claret.  I dyed a G.P. skin claret, and use those claret-dyed feathers....just looks so regal against the copper.
Head:  Claret
I've found that its important to maintain a nice gradual taper on the front half of the body so that the copper tinsel lays down nicely with no gaps.  Tinsel doesn't like steep tapers!
All told, its a beautiful fly created by one of the modern masters of the atlantic salmon fly.
Posted by Gary at 3:45 PM