When New Friends Get Together

You can just tell when you've met a kindred spirit.  I frequent the Spey Pages forum, and have learned a lot, particularly about fly tying and materials dyeing there...plus I've met, electronically, some interesting folks.  On Friday, I finally got to meet and fish with a fellow I've corresponded with over the past year.  John lives in Montreal and of course, I live in southern Vermont.  He invited me up to fish with him for landlocked salmon on a river he visits often.

It was a beautiful Friday, lots of sun - not always the best weather for fishing - but winter's coming, enjoy it while we can!  John suggested using my Deep Green Beauty, and it was moving fish and making them roll, but no hookups. 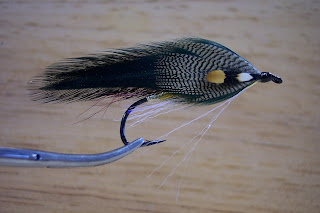 We were fishing a pool where you can see the fish come to the surface quite clearly; John watched for fish while I cast.  After rolling several fish, he said, "Quick, put on something with some color and flash!"   So I reeled in and tied this on, my take on the Mickey Finn: 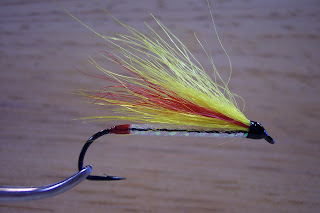 I cover the hook shank with silver mylar, then create the body out of natural pearl E-Z body braid.  The wing is that lovely translucent polar bear.﻿
Well, on the second cast (I flubbed the first one), it was fish on!  The fish didn't realize it was hooked for a few moments, but when she did, she was quite the acrobat.   It pays to know the river and its fish, and John certainly does!  Note that #2 Mickey Finn (click on the pic once to enlarge, click again to supersize)! 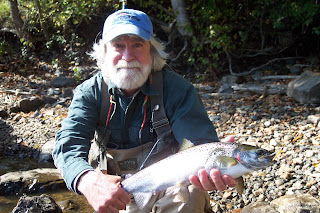 John also landed a fish, and we rolled a bunch more.  AND I got some great tutoring from him on two-handed casting, using my switch rod.  All told, it was a great day.  I had a blast, and I don't think John minded lugging me around...I'm easily old enough to be his father (ugh.).

Earlier this year, I also got to fish with  "forum friend" Rob up on the Miramichi...I think another good time was had by all.  And that's what I think fly fishing forums should/could/wish they would be all about: making new friends and learning new things.  I know I do! 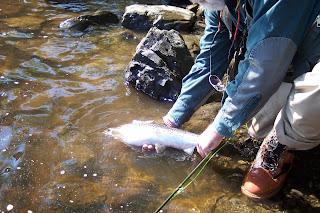