Flies of a Feather...flocked together

The drake mallard duck.  Where would fly fishing, especially for Atlantic salmon in days gone by, be without that most common of the wild ducks?  Not the most striking of male waterfowl, perhaps it was its abundance that lent itself to becoming such an integral part of so many salmon (and trout) flies.  At any rate, a recent celebration honoring a man and a fly he created got me to thinking about the mallard's contributions to salmon angling.

Fred Grant (1901-1971) was an artist, fly tyer and salmon guide on the upper reaches of the Miramichi River in the mid-twentieth century.  He came to my attention via Facebook recently.  Juniper, a small town at the headwaters of the Miramichi, has a community centre (check that Canadian spelling!) which recently erected a monument to one of Fred's creations, the Grant Special (photo from the Centre's facebook page - https://www.facebook.com/JCC506/): 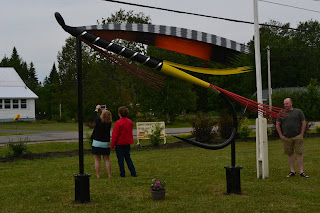 There is a wonderful resource for information about New Brunswick fly tyers, both past and present:   http://www.flyfishingnb.com/index.html.  I googled and googled trying to find information about Fred Grant and his Grant Special - flyfishingnb was the only place I could find anything about the man and his fly.  I combed through all of my salmon fly books...nada.   Flyfishingnb has a great little biography of Fred, and I have taken the liberty of reprinting what the site had to say about the development of the Grant Special:

In the mid 1930’s Fred Grant originated a fly pattern that proved to be successful.  He named the fly the “Grant Special.”  The fly evolved in this way.  Fred was asked to tie the “Reliable” but he didn’t have the Bronze Mallard feather for the wing.  He decided to use grey mallard instead and during the tying process also added a second tail of Golden Pheasant crest just in front of the yellow butt.  Fred tied the “Grant Special” in this presentation, and used florescent green floss for the butt.  The original patter calls for yellow floss to be used for the butt.  Fred and a lot of other fishermen used this pattern with much success.  It is one of a few flies that is a good salmon catcher, and it even earned him a few good dollars.  The “Grant Special” was his favourite feather-wing fly.  In June 1940, while fishing on his favourite river, the Miramichi, he caught a 20-pound salmon on it.  Fred Grant’s favourite hair-wing salmon fly was the “Cosseboom.”  Of all the flies he tied, and liked, Fred Grant never tied or fished with “bugs.”

Here's my tie of a Grant Special.  The wing is problematic - in the text above, it's listed as topped by slips of gray Mallard, but in the recipe, also from flyfishingnb, it's listed as teal.   Since this post is all about Mallard, we'll go with the mallard wing!  Especially in light of the fact that, on that website, there is a photo of a Grant Special tied by Fred that definately sports a mallard wing. 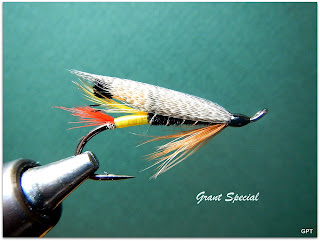 The text from flyfishingnb makes reference to a fly named the Reliable, designed by Pennsylvanian Ira Gruber for the Miramichi, likely sometime between 1935 and 1945, according to Bates and Richards' Fishing Atlantic Salmon; the Flies and the Patterns.  They also note that Gruber was "responsible for establishing the general conformation of the Miramichi-type salmon fly: a short, cigar-shaped body ribbed with close-turned fine tinsel and with a short wing that hugs the body."

My tie of the Reliable: 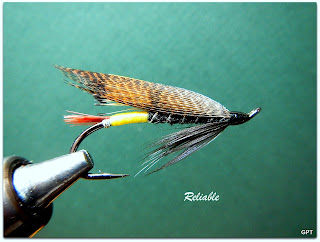 Some time ago, I posted a photo of a Reliable I had tied on a United Kingdom-based Atlantic salmon forum.  One fellow's response to the photo was that it looked pretty much like an old British pattern, the Jeannie.  Good call...mostly just a different tail: 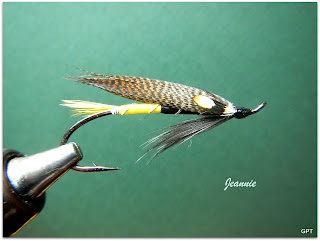 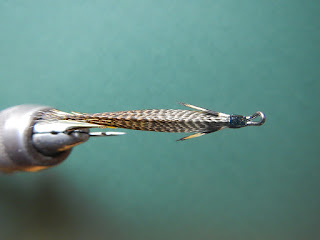 The Jeannie's wing is once again problematical.  Bates and Richards list it as two strips of brown mallard, set upright.  Others have noted that it's a mix of mallard and teal.  Good discussion here:
https://www.salmonfishingforum.com/forums/traditional-fully-dressed-patterns/29550-logie-jeannie.html?highlight=jeannie.

Jeannie (according to Bates and Richards):

Well, if that gentleman on the forum thought that the Reliable looked a lot like a Jeannie, he should get a load of the Black Fairy's resemblance to the Jeannie! 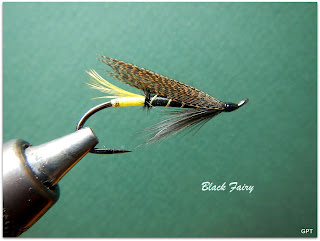 At least the tinsel color got changed up along with the addition of an ostrich herl butt.

The Logie (detailed here: http://theriverscourse.blogspot.com/2018/05/the-logie.html) offers a nice change of pace from the above flies, with its mallard overtopping yellow-dyed feathers from a goose or swan.  Researching the body color(s) will give you fits, though. 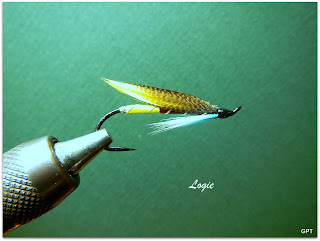 Logie (as I've tied it here)

By no means an exhaustive survey of the mallard's utility as winging material, this has been a fun exercise for yours truly.  There's just sooooo much to learn about salmon flies...and how to tie them!  Featherwing flies never cease to remind me how much I like tying hairwing flies!!