Tying up a batch of Blue Charms and playing on the computer on a snow day here in Vermont: 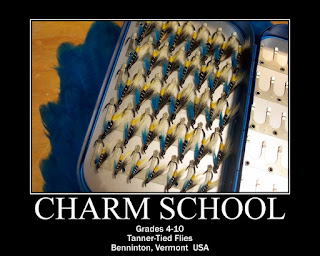 For the last few years, I've found it fun to come up with a fly dressed in Christmas-color finery.  Here's this year, and I hope all my friends have a wonderful holiday season! 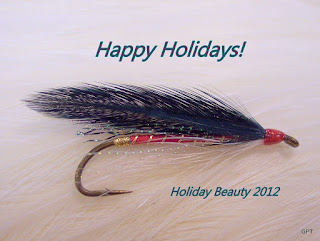 With my very best regards,
Gary
Posted by Gary at 4:08 PM 3 comments

Golden Pheasant to Dye for!

During the past several years, I've really gotten into dyeing my own fly tying materials, and especially, into the color claret.   One doesn't see much in the way of claret-dressed flies on the Miramichi, but that's changing, at least for me!

I have posted, in various places, photos of some of my claret-dyed Golden Pheasant skins.  Those postings created some interest in my "dye work", and I've been pleased to dye a few different items up for friends and acquaintances.  Two of those friends recently asked if I could dye them up a claret GP skin (or in Ben's case, 4 claret GP skins).  Happy to oblige!

First, I needed to find a batch of primo Golden Pheasant skins, preferably with head and wings still attached.  I wanted to buy 8 of them, but most fly shops, I found, have 2 or 3 on the shelf, but not 8.  I also wanted to be sure that all 8 were from the same supply house.  Golden Pheasant skins are finicky things; on one occasion I put two "extra select" skins in the dye bath.  One came out beautifully and completely intact; the other came out one feather at a time.

Enter Poppy at The Red Shed Fly Shop (www.redshedflyshop.com).  I have bought at least one two-hand rod from him, and a few lines and some materials in the past.  Great service, price and products every time.  Sent him an email, got one right back from, "8 skins no problem."  I had the skins in my grubby little hands two days later all the way from Poppy's shop in Peck, Idaho, and they were excellent, just what the doctor ordered. 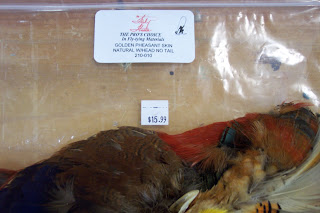 Finding the claret color I was looking for took some time and experimentation and advice from others.   I finally settled on this dye (http://www.organicdye.com/industries/fly-fishing-dyes): 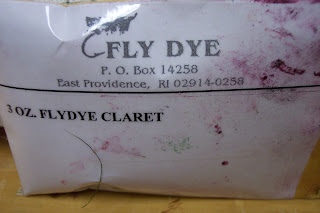 I have purchased several Whiting American capes dyed claret by Whiting in the past; this is virtually the same color, to my eye, that Whiting produces.

Harking back to my statement about the finicky nature of Golden Pheasant skins:  I played it safe, and never brought the dye bath to more than 175 degrees F.   The skins only needed to stay in the bath for 10 minutes.   I used a teaspoon of dye (probably overkill) in about a gallon of water.  I don't keep very accurate records....ok, ok, I don't keep any records....of my dye mixes, but I just did it and I have just enough short-term memory left to relate to you an accurate acounting of the mix.  Not likely that will happen again.  Oh, and I blow dry my skins right after giving them a soapy rinse bath.  And I'm most happy to report that ALL of the skins came out of the bath in one piece!

So, now we need yer standard before and after photo set:

Out of the package: 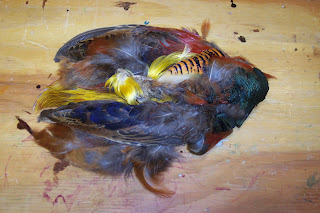 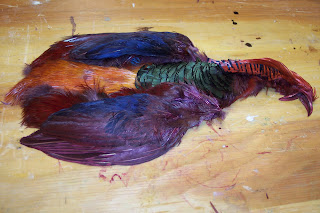 The crests take on a particularly striking color.  Have to come up with a fly that does them justice! 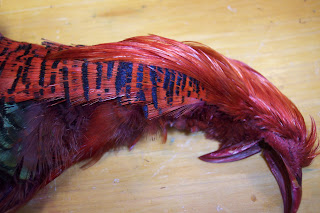 And of course, we need the "whole pile of skins" shot (photo is "redder" than the skins actually are: 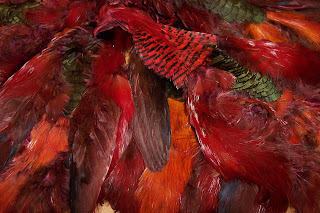 Claret-dyed Golden Pheasant makes for some pretty flies, and based on their success, atlantic salmon think they're pretty sweet, too! 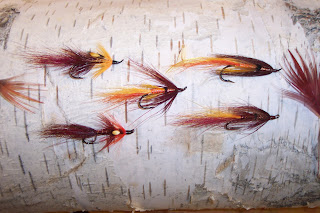 Doing my own dyeing adds immeasurably to the joy I derive from the sport of fly fishing.  It wasn't hard to learn, and fortunately for me, is definately not rocket science.   And trust me, I did not do well in organic or biochemistry in grad school, so I have to say, just about anyone can do it.

Here are a few other little tidbits I've dyed for friends recently.  I think some fish will be fooled with this stuff! 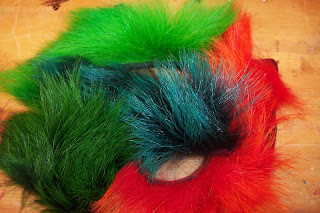